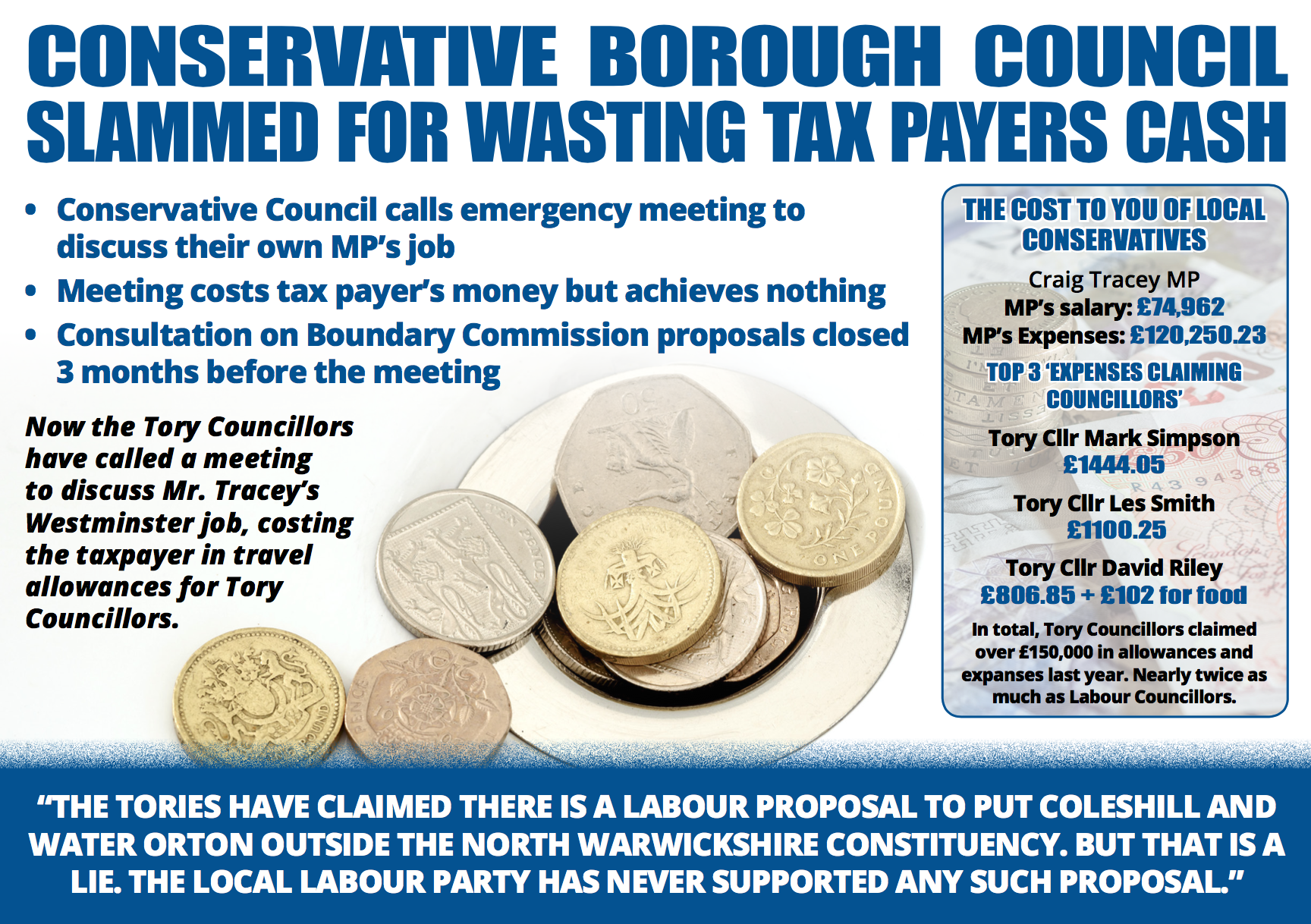 council meeting to discuss proposals on Westminster Parliamentary boundaries. The meeting in Atherstone was called at short notice for Wednesday 22 March 2017.  The cost of the meeting must be met by the taxpayers of North Warwickshire.

Labour Councillors have boycotted the council meeting, because they say it is a waste of public money. Labour have called for Conservative Councillors to personally reimburse the Council Tax payer for the cost and demanded that no travel allowances or taxi fares should be claimed for attending the meeting.

“This meeting is a waste of council taxpayer’s money. The Tory Councillors will claim travel allowances to talk about Parliamentary boundaries, but last year when they could have made a submission to the Boundary Commission, they did nothing before the deadline for submissions. The Conservative leadership were then asleep on the job. Now they want to call a special meeting to cover up their failure to put it on the agenda at a regular meeting.

“Labour decided to boycott the council meeting because we think it’s wrong to claim public money for Conservative politicians to contemplate their own navel.

“This is all about Westminster, not North Warwickshire. They have got suddenly panicked about the job security of their MP, Craig Tracey.

“Last year local tax payers paid £74,962 in salary and £120,250.23 in expenses for Craig Tracey and now the Conservatives have charged council tax payers for this ridiculous meeting to discuss how they can protect his job. They should worry less about the future of their Tory MP and more about the future of services for people in North Warwickshire. The Tories in Warwickshire have put up people’s council tax, cut the ‘Boroughcare’ for the elderly, imposed charges for new dust bins and now they are wasting money on this meeting about their MP’s boundaries. It’s outrageous.

“The Conservative Councillors in North Warwickshire should each personally reimburse the Council Tax payer for the costs incurred for this party political meeting. They should not be allowed to claim travel allowance or the cost of their taxi fares from the council tax payer because the meeting is political.  I will be checking what each of them has claimed for this meeting.

“The Tories have claimed they will also discuss a Labour Constituency Party proposal to put Coleshill and Water Orton outside North Warwickshire constituency. But that is a lie. The local Labour Party has never supported any such proposal. This whole meeting is a confusing, pointless, costly waste of council taxpayer’s money.”