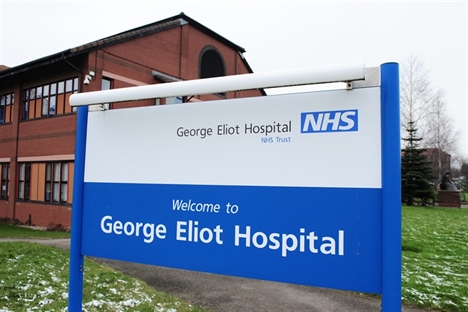 New figures released by NHS England, show that during the last week The George Eliot Hospital was forced to declare that theywere unable to deliver comprehensive care, with increased potential for patient care and safety to be compromised.

Figures also show that the hospital had to declare to further alerts during the last week as it struggled to cope with demand.

“This is a terrible situation for our NHS to be in. It’s a situation created in Westminster by Conservative politicians who have just failed to grasp the seriousness of this. We have a crisis in our health system and in our social care sector.

“Our NHS faces cuts, our social care service faces cuts and the budgets used to improve people’s health also face cuts. This is a recipe for disaster and until we get action from Government to deal with the crisis, nothing will improve, in fact it could get a whole lot worse.

“I hope our MP in North Warwickshire will now apologise for the leaflet he put out in the last few weeks. It said he would ‘ensure the Eliot is supported and never mismanaged again, as it was under Labour.’

“Mr Tracey should admit he’s failing. The NHS is in crisis on his watch and it’s about time he did something about it rather than just blaming the last Labour Government.”