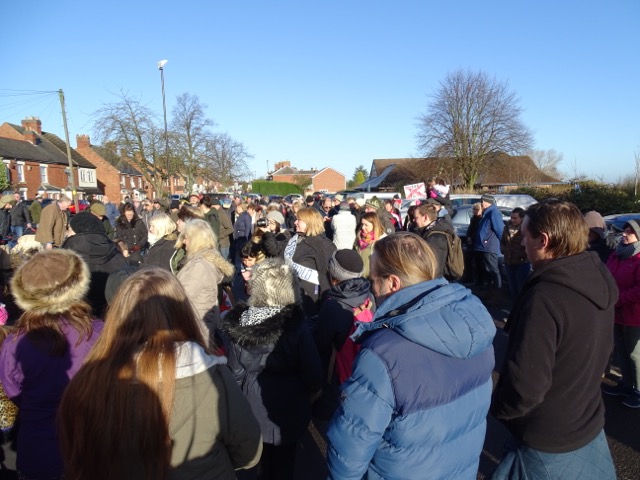 More than 300 people from Dordon and Polesworth (including families with young children in push chairs and residents on mobility scooters) turned out on New Year Bank Holiday Monday to walk the 400 acre area of countryside identified for housing development under the local plan.

Carrying posters and homemade banners, people of all ages walked for over an hour along the historic coffin trail linking the two villages, around the perimeter of the ancient woodland and along the circumference of the site where it is proposed that 2000 houses should be built.

The walk started in glorious sunshine at 11 am from the Doctors surgery and finished about 1pm.

Five local Labour Cuncillors also came along to signal their support and to show that they are determined to campaign with local people to stop this development.

“The Borough Council should withdraw this plan and start again. Now that the government has signalled a change of policy and proposing the development of new garden villages, the Council should seriously consider the option of a new settlement elsewhere in the Borough. ”

“It would be a real tragedy if so much countryside was buried under concrete. We need more green space for people to walk, get fit and enjoy the natural world  -; not less. The fact that so many people turned out today to protest shows how much opposition there is to this plan. We are determined to fight these proposals at every stage.”