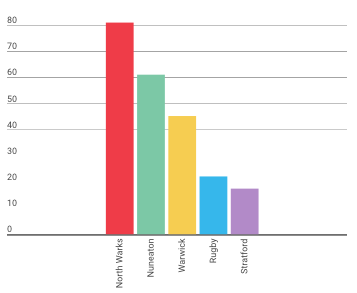 Research published today shows that North Warwickshire Borough Council is facing the largest reduction in public spending per head in the whole of the County and the third largest of any district council in the West Midlands.

Residents across North Warwickshire will see the Council spend £81 less per person as a result of Government cuts to public spending.

“This is a huge cut in the money we have available locally to deliver services and help those in need. It means there is less money being spent on leisure centers, on supporting elderly people, on keeping our streets clean and on making our borough safer.

Make no mistake; this is a political choice, not a necessity. Other areas of Warwickshire, such as Stratford Upon Avon have had just a £17 cut in spending per head. If North Warwickshire had been treated the same as Stratford, the Council wouldn’t even have to think about closing Arley Sports Centre or charging elderly people for Borough Care.