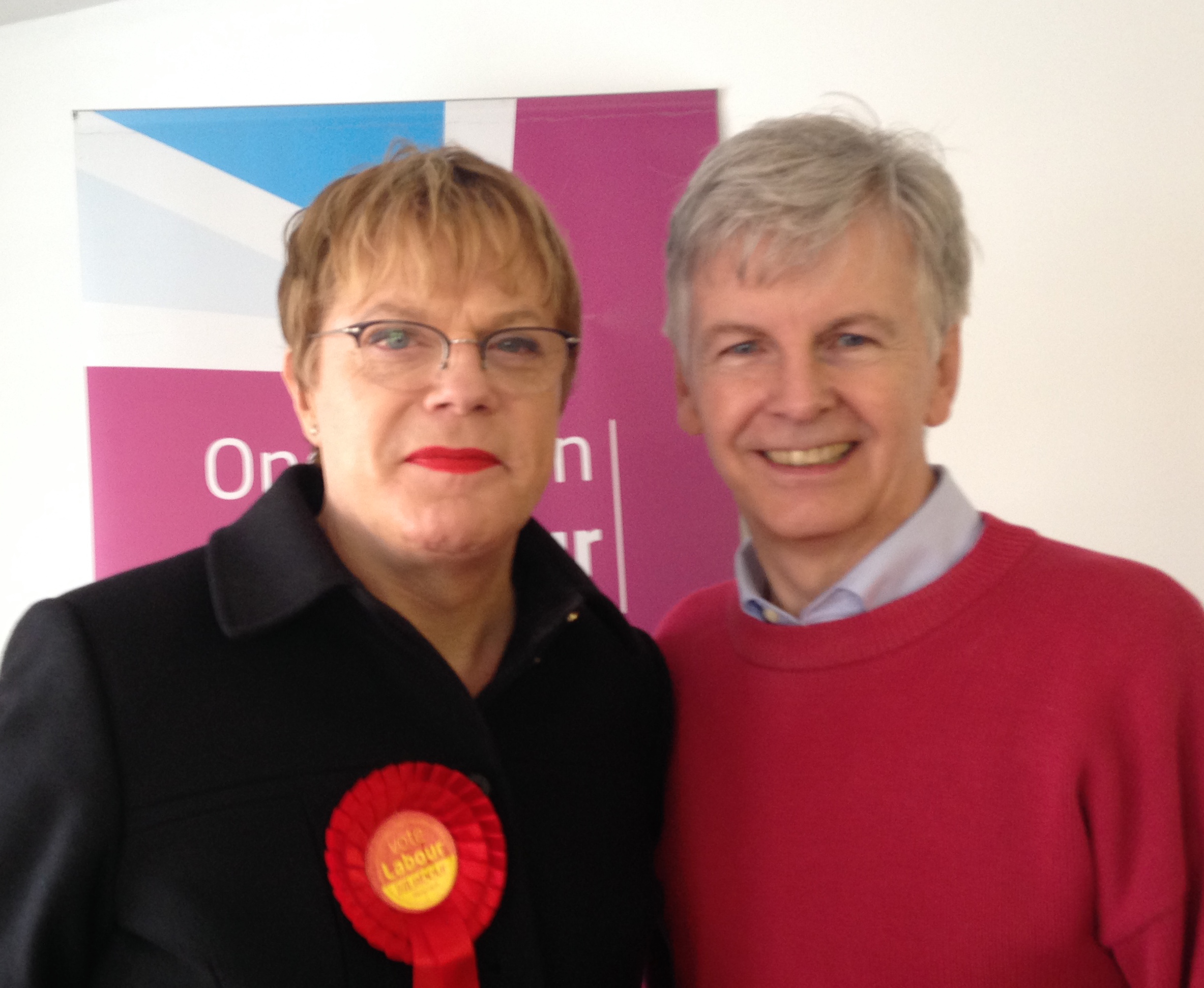 From Hollywood to Atherstone the Comedian and film star Eddie Izzard was be in North Warwickshire on Wednesday to open the campaign office of Mike O’Brien.

Eddie Izzard has done sell out gigs cross the UK and America, including the Hollywood Bowl and Madison Square Garden and starred in films like ‘Ocean’s Twelve‘, ‘Ocean’s Thirteen‘ with George Clooney and ‘Valkyrie‘ with Tom Cruise.  He arrived in Atherstone and met volunteers at Mike’s Campaign Office before cutting the ribbon.

The intention was that Eddie would join Mike in the town centre at a street stall with a petition against privatisation of the NHS for half an hour but the rain pelted down so Mike and Eddie – followed by an ITV camera crew – went for a cup of tea in the Old Bakery on Long Street. Local people were delighted to meet the famously transvestite man turned up in a dress and lipstick who seemed able to make everyone laugh. Later passers by were stunned to see him walking down Long Street chatting to people with Mike, followed by a TV crew.

Eddie said, “This is the most marginal Tory held constituency in Britain with a 54 majority and its crucial that Labour win it to we save the local hospital.  The Conservatives tried to privatise it last year and if they get elected they will try again.

“Mike was the MP for 18 years and I just think its great that he did not walk away after 2010, but stayed to fight local campaigns because he cares about people here.”

Under questioning from journalists he dismissed claims that Labour was anti business, saying, “I am a successful entrepreneur, a businessman, I can fill the Hollywood Bowl and make lots of money and I believe people should be allowed to be rich; but I also support Labour because I don’t want people to be poor or to have to queue at a food bank. I don’t want unfair zero hour contracts. I don’t want the more divided Britain we have seen in recent years. Labour is comfortable with wealth but it is the party that represents working people too.”

Mike O’Brien said, “I was delighted to have Eddie Izzard open my campaign office. He not only has star quality but also has a warm and engaging personality.  The volunteers loved him.  He also enjoyed his tea in the Old Bakery in Atherstone.”