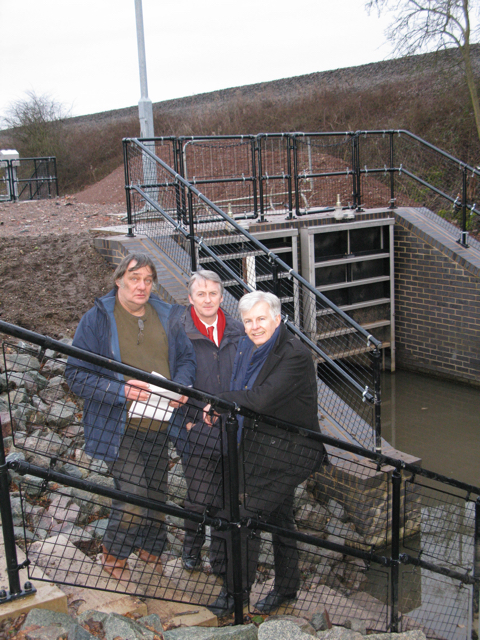 Due to a bureaucratic mix up, an £8.5m flood scheme protecting a North Warwickshire village has been left unfinished with twogaps in the defences through which water can flood.

The village of Whitacre Heath has been repeatedly flooded in recent years and a flood prevention scheme has now been put in place, however a railway line runs through the flood defenses and the defenses have not been connected to the raised railway embankment, leaving two five metre gaps between the defenses and the railway line. Although since last year there have been mounds of earth nearby ready to fill the gaps in. The reason appears to be that the required consents to link the flood defenses to a railway embankment have not yet been obtained from Network Rail.  The delay has lasted months. The contractors have now left the area unable to finalise the scheme and villagers have been left wondering whether the scheme will be finished before the next potential flood.

The Labour Shadow Environment Minister Huw Arranca Davies was in the Midlands on Thursday (5th February).  He had been the Environment Minister under Labour and was asked by Mike O’Brien to visit the scheme and to advise on sorting the problem out. He was very surprised by the gaps and said that when he was the Minister, this would have been sorted out quickly.

The Shadow Minister said, “This looks like a very good flood prevention scheme marred by these two peculiar gaps in the defences. They need to be filled.  The consents should have been obtained early in the process.

“When I was the Environment Minister before 2010 local MP’s would come to me with these kinds of things and we could normally sort them out fairly quickly. This ought to be done in the next few weeks, but if it were not, I want an incoming Labour Minister to deal with it quickly.

“I just hope there is no flooding in the next few weeks or villagers will be rightly furious.”

“Villagers are very pleased with the scheme but not the gaps. Huw will probably be the Minister responsible for flooding issues if Labour wins the election so it was helpful to have him visit the village and see for himself.  This issue needs to be dealt with. I am contacting Lord Chris Smith again, to ask him to help. He did last time.  It would be tragic if the winter rain and snow resulted in flooding in Whitacre Heath after the spending of over £8m; all because of a gap in the dyke.”

Independent Parish Councillor Tony Rumble, the Vice Chairman of the local Parish Council, showed Huw Arranca Davies and Mike O’Brien around the scheme.  Cllr Rumble told him, “We are pleased with the work, but we just need it finished. The workers have left leaving mounds of earth to fill in the gaps.  We don’t want the village flooded now. I was pleased Mike O’Brien brought the Shadow Minister along. We need this thing dealt with.”

However, the Shadow Minister was pleased with the news that another issue facing the village has been dealt with. The village needed a pumping station to pump out water from within the defences and a Pathfinder Grant of £32,000 has been obtained to create the pumping station. Huw Arranca Davies was the Minister for the Environment before 2010 who created the Pathfinder Grant Scheme aimed at smaller flood prevention projects so he was particularly delighted that the scheme had helped Whitacre Heath.