Shop workers at Tesco’s in Bedworth have been joined by Mike O’Brien to campaign for respect for shop staff.  This is part of the Freedom From Fear Campaign, which seeks to prevent violence, threats and abuse directed at retail staff which is supported by the retail union USDAW and the British Retail Consortium, bringing together retail unions and employers.  The staff gave out balloons and campaign literature to alert the public to a problem caused by a small minority of shoppers who become violent. 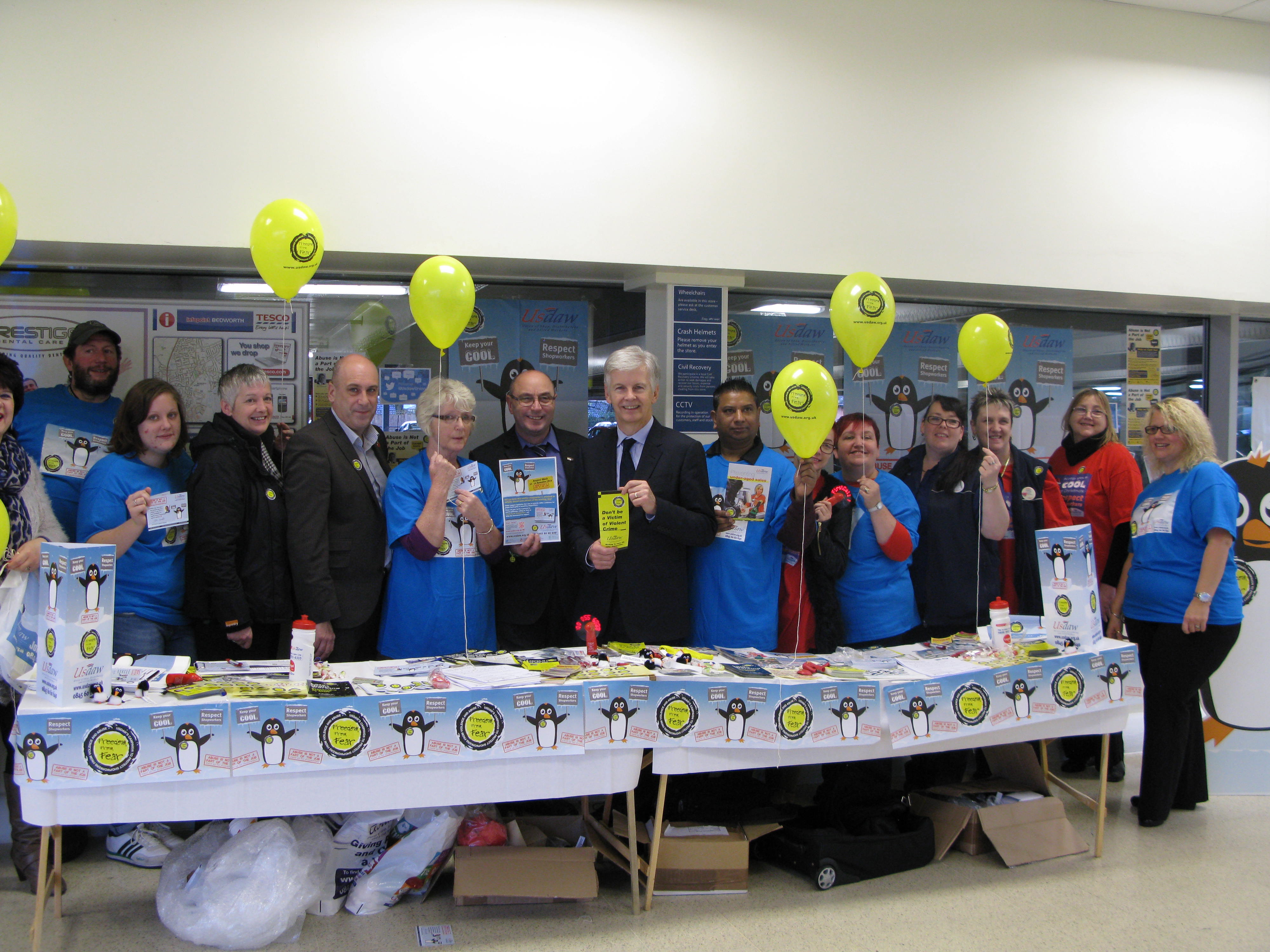 The campaign supports a Protection of Workers Bill that would introduce a specific offence of assaulting a worker serving the public, extending existing protections for police officers, immigration officers and Scottish emergency service workers.

“Retail employees are sometimes confronted with violence, threats and abuse by members of the public.  This is unacceptable. It is important we stand together and ask people to respect shopworkers.

“This campaign for stiffer sentences has been obstructed by Tory and LibDem MPs, on five occasions in the current Parliament.  They combined to block the new law when proposed by Labour.

“Making the assault of a worker serving the public an offence in its own right would simplify sentencing. Under sentencing guidelines – but not statute – assaulting a worker is an aggravating factor meriting a higher sentence. But there are concerns this is not being applied when decisions are made about prosecutions and sentencing.

“I want to see the law changed to ensure that proper punishments are given out. This will send a clear message that assaulting workers who are serving the public is totally unacceptable.”

“We are grateful to Mike for supporting our campaign to keep our members safe at work.Often, in the course of their duties, shopworkers are expected to enforce the law, whether that is preventing under-age purchases of products like knives, tobacco or alcohol, or detaining shoplifters until the police arrive, they can be put in real danger. Parliament has given shopworkers the duty to enforce the law, so Parliament should provide the necessary protection.

“I have been shocked by the leniency of some of the sentences for assault of workers. Over 300 shopworkers are assaulted every day and it is time to say enough is enough. The Government must act to address this issue and act quickly.” 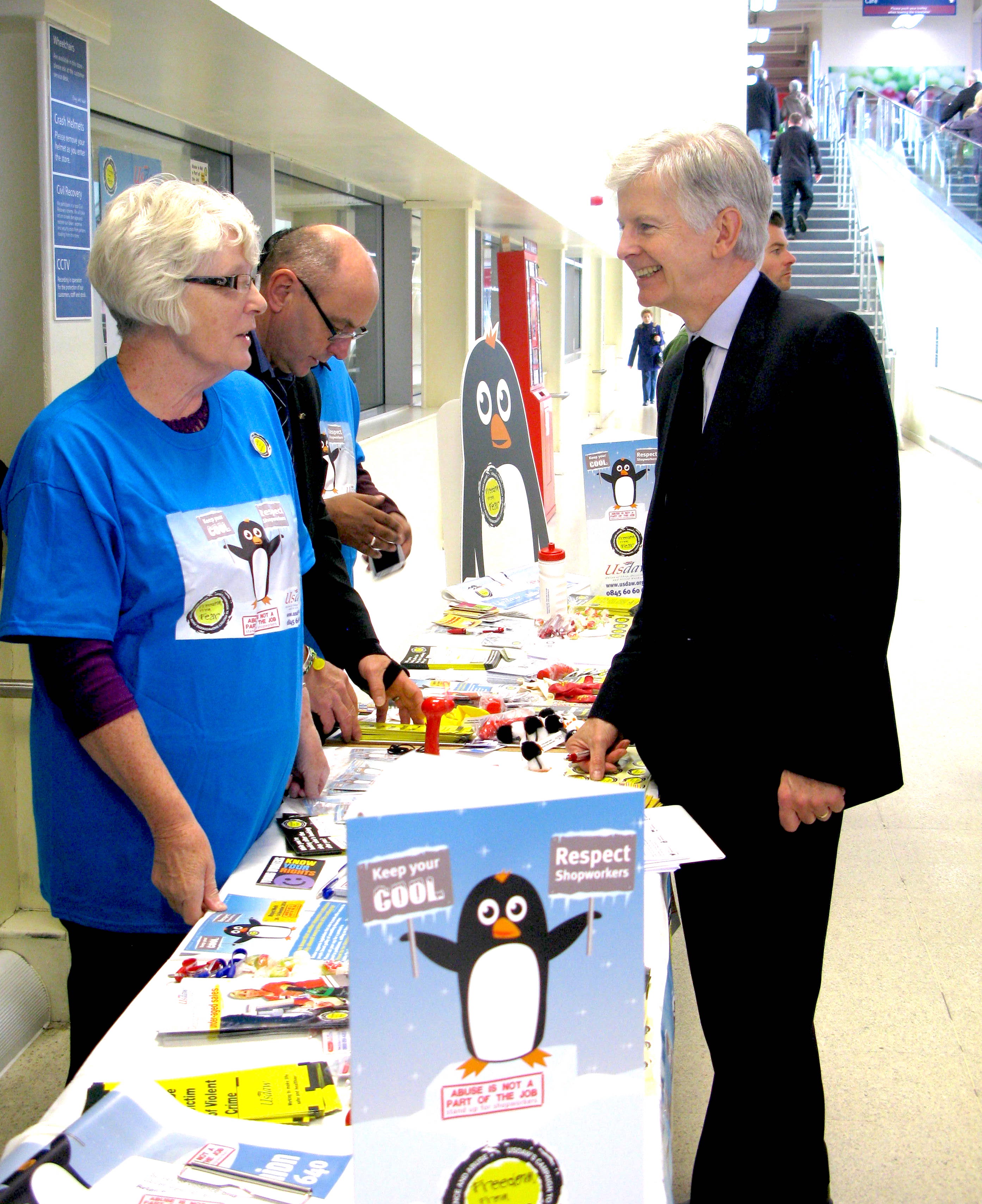 Usdaw is the UK’s fourth biggest and the fastest growing trade union with over 429,000 members. Membership has increased by more than 17% in the last five years and by nearly a third in the last decade. Most Usdaw members work in the retail sector, but the Union also has many members in transport, distribution, food manufacturing, chemicals and other trades.  Usdaw’s Freedom From Fear Survey Report 2014, the interim results of shopworkers experiences over the last year, from the first 997 responses, are:

Respect for Shopworker Week is an annual event where shopworkers talk to the public about the problems of violence threats and abuse, asking customers to ‘keep their cool’. Part of the campaign will be encouraging shopworkers not to accept abuse as just being part of the job and report incidents to their manager.