Mike O’Brien does the Ice Bucket Challenge for Cancer Charity. And nominates other local politicians to take the challenge! 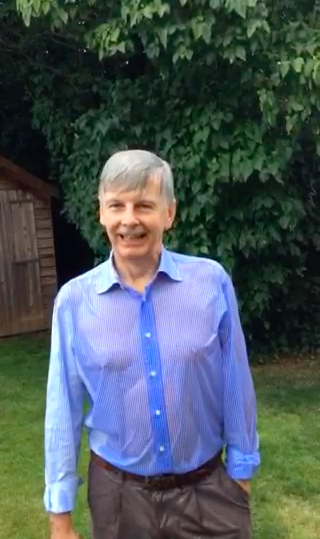 The fundraising challenge is sweeping across social media. The idea is to challenge someone to have a bucket of ice-cold water poured over their head in exchange for a text donation to Macmillan Cancer Support or another charity. Then film it and share it.

All that is needed is a bucket, ice, water, a smartphone, a towel and a change of clothes.  Fill the bucket with iced water; pour it on your head, film this on your smartphone and post the video to Facebook / Twitter and text to donate £3 to Macmillan by sending ICE to 70550. Then nominate your friends / enemies to do it next. Those who you nominate get 48 hours to text ICE to 70550 to give £3 to Macmillan. Wimp out and text FINE to 70550 to give £10 instead.

Mike said, “It’s for a good cause and I was challenged by an A level student from Polesworth to do it. The summer is the political silly season so I thought, why not?

“My brother Vince and my teenage daughter Caroline had already done it.  And Caroline, took enormous delight in pouring the bucket of water and ice cubes over her Dad’s head. It made her day. Revenge for those times I’ve told her to tidy her room!”

Mike said, “I have seen film of celebs like Benedict Cumberbatch and politicians like George W Bush doing it, so lot’s of people have stepped up to the crease.

“I have now challenged other local politicians to do it for charity.”

Film of Mike doing the Iced Bucket Challenge can be seen on:

The Ice Bucket Challenge originated in the USA where a Motor Neurone Disease charity ALS used it to both raise funds and illustrate the freeze on muscles that occurs with Motor Neurone Disease. In the UK, MacMillan Cancer Support has run the campaign, but the MND Association has started its own challenge so donations to either or both are usual. Mike is donating to both.