Jobs: But not at any price 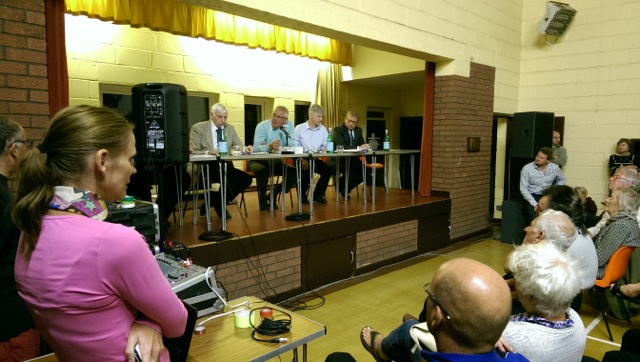 “We want jobs: but not at any price,” Mike O’Brien, told a packed meeting to protest against proposals to create a Business Parkwith freight storage and HGV’s on the former Daw Mill colliery site.

This was one of the largest public meetings in a generation in the borough of North Warwickshire.  About 1000 people gathered on Tuesday 12 August at the Nether Whitacre Community Centre, to hear a panel, which included Mike O’Brien QC, Marcus Jones MP and the planning officer from North Warwickshire Borough Council, Jeff Brown. Haworth Estates and Dan Byles MP were invited but did not attend.

Cllr Phil Mason, who said, “We invited the site owners, Haworth Estates, to attend but they declined, chaired the meeting. They claim they will create 1,500 jobs on the site. They are making an application for outline planning permission.  Our concern is focused on the number of HGV’s that could come out of the site if they get planning consent.”

Mike O’Brien said, “It is too high a price to pay for jobs if hundreds – and perhaps as many as 1000 HGV container lorries -; end up going through unsuitable narrow country lanes and villages like Shustoke, Nether Whitacre, Fillongley or Corley creating a disturbance and risks of accidents for local people 24 hours a day 7 days a week.”

He said the key concern was the HGV’s and that the Council should consider whether there was a need for another freight terminal in the area or whether the better use would be a business park with hi-tech jobs, light industry and offices. “We want to create jobs but the right kind of jobs for this site.”

He also raised a planning consent in granted to the former mine owners RJB Mining on 26 November 1996 which required them to return to the Green Belt.   He said this might give local councils more “clout” in deciding exactly kind of businesses would use the site.

Council Planning Officer Jeff Brown told the meeting that this was an outline application and that Haworth Estates had applied for “flexible planning consent” but they had not said which businesses they had on the site. The application would have to be considered under the governments new National Planning Policy Guidance and depending on what happened, the application might be finally determined by the Secretary of State after a public planning inquiry.

There was strong criticism about the quality of the Transport Assessment document offered by Haworth Estates and county council officers, who also attended the meeting, said that they would meet Haworth Estates next Monday to talk about the document. The chairman, Cllr Phil Mason said it was an inadequate document.

Steve Gardner from Fillongley, expressed concern about the impact on the cross roads and narrow road through his village.

“The redevelopment of the site would not lead to an increase in traffic on the local highway network. There would be no adverse impacts arising from the development proposal.  However, while the college we traffic has been absent from the local highway network local residents may have perceived improve conditions and therefore the reintroduction of traffic may be perceived negatively.”

Mike O’Brien said that, “So now we know, they think it’s all in our imagination.” He criticised the document for failing to deal with the problems in Fillongley, the narrow right-hand bend at the Griffin Inn near Shustoke all the “Green Man” cross roads in Coleshill.

There will be another meeting on Daw mill in Coleshill on Thursday evening.