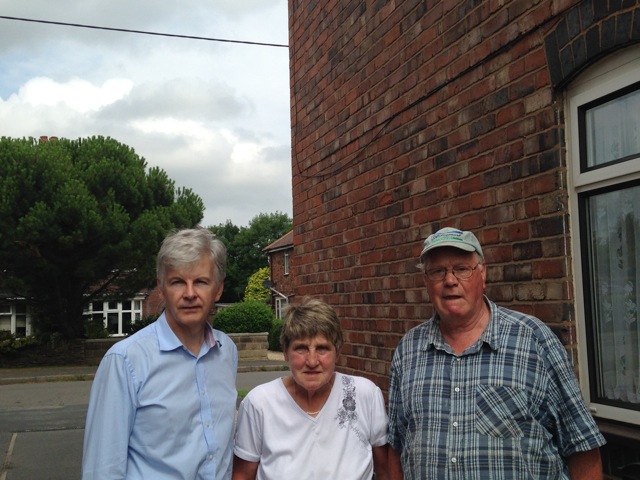 An online petition has been launched against proposals for Warwickshire County Council to allocate the former Grendon Waste siteas a “Temporary Stopping Site for Gypsies and Travellers”.  The campaign in the North Warwickshire village has gathered pace as a Facebook campaign was also launched and a survey showed wide opposition.

Local councillors and Mike O’Brien talked to residents over the weekend and distributed surveys to get local opinion about the proposals.

“There was universal opposition among those I talked to,” said Mike O’Brien. “This is clearly the wrong site for a gypsy camp; yet county Council officers insist it is under active consideration.”

Ray and Maureen Wileman who live in Spon Lane had atypical reaction (pictured with Mike O’Brien).  Ray said, “We don’t want this camp here. Whoever you talk to in the village, they say the same.  We need to kill this idea in its tracks. It’s great that villagers have the support of our local councillors and Mike. Warwick cant do this to us. That waste site was supposed to be for houses not a gypsy camp.”

Maureen Wileman said, “Three months ago the village had over eighty houses forced onto the land at the back of us, now they want to put a gypsy camp here.  Why have they got it in for Grendon?”

“There is concern that Warwickshire County Council are doing this for their own convenience. The council owns the land and there is already concrete hard standing on it, so it’s going to be cheaper for them to put the travellers in Grendon.  But the villagers don’t want it and their voice must be heard down in Warwick.”

County Councillor Pete Morson said, “It’s a real worry that the borough and county councillors like me who represent the village were kept outside of the loop when discussions took place about this. We were as shocked as the villagers to find out about it.”

The petition organised by the councillors can be signed by going to http://www.electmikeobrien.co.uk/no_to_grendon_gypsy_site or accessing it on Mike O’Brien’s Facebook