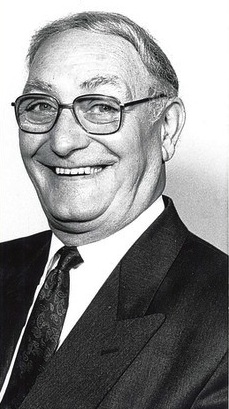 Alan Smith had been a miner and later a Pit Deputy at Kingsbury and Baddesley collieries for 45 years.  On his retirement, he devoted himself to representing the people of Polesworth and Labour politics.

His close friend, Cllr Ray Sweet from Baddesley spoke a eulogy at the funeral.  He said,

“Alan led a life devoted to his family and to public service as a Parish councillor, a borough councillor and a county councillor.  Whilst he was proud to have risen from the pit to the highest elected office in Warwickshire, his greatest passion was education.  As Vice Chairman of the Education Committee he visited schools all around the county and helped to modernise our schools, improving the education of thousands of children.”

Alan Smith was well known in Birchmoor where he lived until his death aged 85. He walked his dog daily in the village talking to everyone he met.

Mike O’Brien, the former MP and government Minister who attended the service, said,

“Alan Smith was highly respected as a Mayor and local councillor.

At a time when local schools suffered from falling school rolls, he helped  make the tough decisions needed to close some schools in order to focus the funding on the remaining schools, so that overall children benefited. He did what was right even though it was unpopular at the time.

“No matter how high he climbed he stayed true to his roots and his local community. He was a thoroughly decent man. His wife Nita gave him unstinting encouragement and help.  As the Mayor and Mayoress of North Warwickshire they both did the borough proud.”

“Dad had a profound effect on all those he met. He was often away from home attending various meetings as he felt that he owed it to the people he represented to attend. He was a wonderful dad too, we spent a lot of time together and were very close. We will all miss him very much.”

Cllr Ray Sweet ended his tribute to his former mining colleague and council friend by saying, “We will miss you. Good bye, mate.”