A step big toward privatisation

“The privatisation of the running of George Eliot Hospital came a big step closer today with the announcement of the shortlist of who will bid to take over the hospital.  The shortlist includes three private companies,” said former Health Minister Mike O’Brien.

The Government’s Trust Development Authority (TDA) is managing the bidding process. The TDA said in September George Eliot Hospital could be administered by “a non-NHS organisation” or another trust. In an announcement smuggled out to hit the press on Christmas Eve, the government have said that three private firms and two NHS trusts will now bid for the hospital before a decision is made in July 2014 on who takes over before the end of the year.

The private companies are Circle Health Limited, Care UK Clinical Services Limited, Ramsay Health Care UK and the NHS led bids are from South Warwickshire NHS Foundation Trust and University Hospitals Coventry & Warwickshire NHS Trust.  Although it is unclear yet whether South Warwickshire has made its bid in association with its recently announced private sector partner ‘Serco’.

It was thought that the bidding process might be put on hold after the Report into NHS failings by Sir Bruce Keogh published in July 2013 put the hospital on special measures because of failings, however, the TDA has decided the bidding should go ahead whilst the hospital tries to put rights its problems. If a private company takes over it is unclear what will happen to the much praised relationship Sir Bruce Keogh engineered between the George Eliot Hospital and University Hospital Birmingham to help sort out the problems at the Eliot.

The current tendering process involves two solutions – either another hospital such as South Warwickshire or UCHW at Walsgrave taking over the George Eliot or a company taking over the management.

Mike O’Brien was Minister of State for Health 2009-10 and he is seeking to win the North Warwickshire and Bedworth constituency for Labour at the next election.  He said,

“George Eliot Hospital was put on special measures earlier in July. The top priority for the George Eliot Hospital today should be to deal with the weaknesses identified in the Keogh Report; managers should not be distracted by a complex, time consuming, bidding process. Privatisation is the wrong distraction, at the wrong time and for the wrong reasons.

“In a brief announcement calculated to be public on Christmas Eve this district hospital in middle England has been catapulted to the cutting edge of NHS privatisation.  If the Conservative Party succeeds in privatising here they will roll it out across UK, with private companies taking over the management of NHS hospitals.

“Today when hospital managers make decisions NHS patients must come first, but in 2014, if a private company wins the competitive bidding war, then that could change.

“The managers of a private company will have other legal priorities.  Firstly, companies must repay the banks that lend them money because if they don’t, the company will go bust. Secondly, they have to show they are moving toward a profit for the shareholders or they won’t be employed for long. Thirdly, will come the patients.

“People will have to decide whether they want the managers running our local hospital will have NHS patients as their first priority or the third priority after the banks and shareholders?

“The privatisation process is driven by a right wing ideology and inevitably poses new risks for the future of the George Eliot Hospital.  This was demonstrated last week when the company Serco said it would back out of NHS contracts with Braintree NHS Hospital and the running of GP services in Cornwall, following criticism of the quality of care they provided. Currently Serco is also being investigated by government agencies over allegations about false claims for millions of pounds on Home Office contracts. This shows the risks of private companies running hospitals. They promise the earth but often can’t deliver and pull out, leaving things worse. A private company is a high risk bet for this local hospital.” 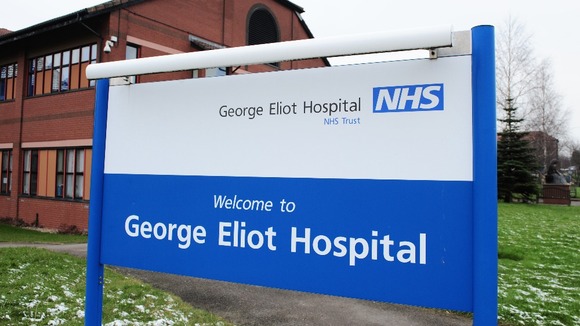 The shortlisted bidders are

“This bidding process should be stopped. Hospital managers should focus on sorting out problems identified in the Keogh report.

“The only reason this bidding war is going on is because the George Eliot Hospital did not meet Andrew Lansley’s tests for foundation trust status and he therefore insisted they needed a ‘new partnership’, leaving the hospital board with little choice. This is a political agenda which the Conservatives are trying to rush through before the general election.”

Since the bidding process has started it is has been overseen by the Government’s Trust Development Authority.  The Hospital NHS Trust Board is being consulted on the process.

“Whilst the trust board is fronting this process, the Governments Trust Development Authority is orchestrating it from Whitehall for ministers.”