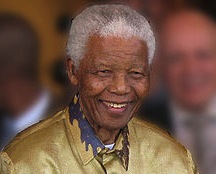 Mike O’Brien has paid tribute to Nelson Mandela. He said,

“He was a man of great integrity, clarity of vision and a commitment to justice that was inspirational.”

I met Mandela on three occasions.

“Before he was President when I talked to him at  the Commons and then very briefly when he was President. I thought he was not always as good a public speaker as some people claim, but he came across as a man of great integrity, clarity of vision and commitment to justice that was itself inspirational.

“On the third occasion, he had long retired.  I met him purely by chance just outside the rear entrance to Parliament. I was taking my sister in law on a tour and my wife and children were with me. A car arrived and Bill Clinton got out and he waited for a second car to pull up. Clinton then helped Nelson Mandela get out of it. They were there for a private meeting. We went over. We were in the secure area so the security people there were unconcerned.  Mandela was clearly absolutely delighted to see my children. Of course, he had no interest in talking to me, but just wanted to say hello to the kids. He was very nice and natural.  My eldest took out a pen and paper to ask for his autograph, but Bill Clinton signalled to her not to ask.  When Mandela had gone, Clinton came back to apologise “because he doesn’t see so well on some days.”

“I said to my youngest about Mandela, ‘Remember him because he is a great man’. She said, ‘He seemed very nice. Just like a grand dad.’  I’m pleased they had the opportunity to say hallo to such a towering historic figure.

“The most important thing Mandela did was to resign from the Presidency of South Africa.  Up to then African liberators had stayed in office until they became dictators.  Mandela established his greatness and secured a multicultural South Africa by retiring. After his resignation his mere presence as an iconic figure in South Africa guaranteed democracy. Things could easily have gone wrong and Mandela’s presence ensured they didn’t.

“Back in the 1960s Mandela was imprisoned the terrorism. I remember in the 1980s feeling angry when Margaret Thatcher condemned him. Then he came out after decades in prison talking of reconciliation and forgiveness and forged a new country. More than that, Nelson Mandela personified the idea that justice could overcome the evil of racism.”