Protest against “Town within the town” in Atherstone gathers support 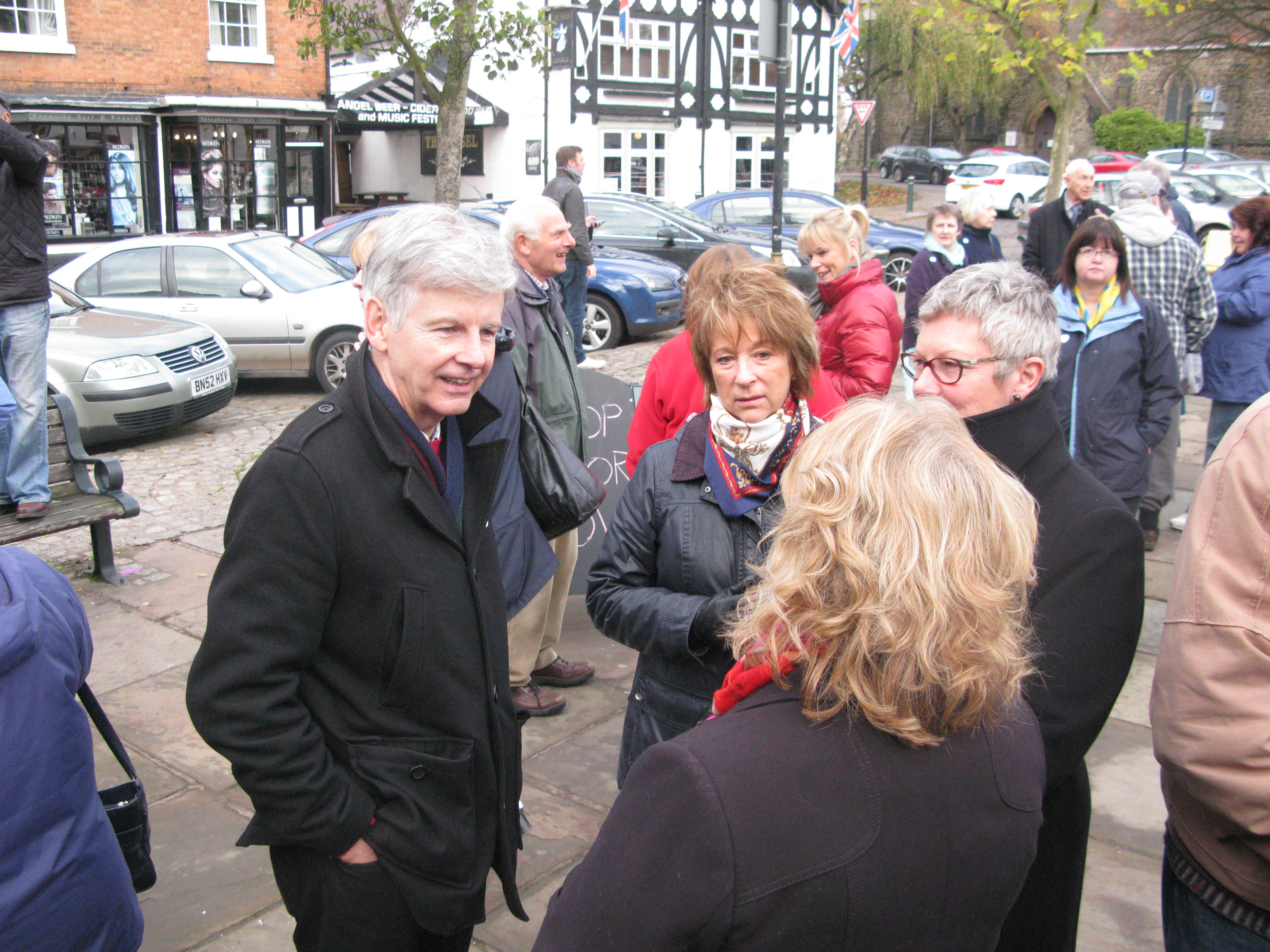 Bloor Homes and Merevale Estates are proposing to build 660 houses on land near Old Holly Lane, opposite the Aldi headquarters, and backing onto homes in River Close.  Residents insist that this amounts to a “town within a town”.  They rallied in the Market Square to seek support for their protest.  The Borough Council are expecting a planning application about the side in the next couple of months but in the meantime a consultation has been undertaken by Bloor Holmes.

About 100 residents attended the demonstration that included an exhibition created by them about the impact of the development on the local community.

Mike O’Brien said, “The decision by the government to relax planning laws has encouraged developers to propose big housing projects across the country.  I came to support local residents because they are right to oppose the sheer scale of this development in Atherstone.  The local infrastructure can’t cope with 660 houses.  The local community doesn’t want it. It’s a bad planning application.

“I will be calling on the borough council to reject it, but local councils have had much of their power on planning taken away by Parliament in the new National Planning Policy Framework. Even if the council reject it, there’s a real prospect it could be granted on appeal now.”

Cllr Derek Pickard, who represents the area, said, “I am totally opposed to this development.  It’s much too big. I’m concerned that the narrow Holly Lane Bridge could not support up to 1000 extra cars each day. Much of the housing is on land that regularly floods. The development of this size would require massive flood defenses, in my view.” 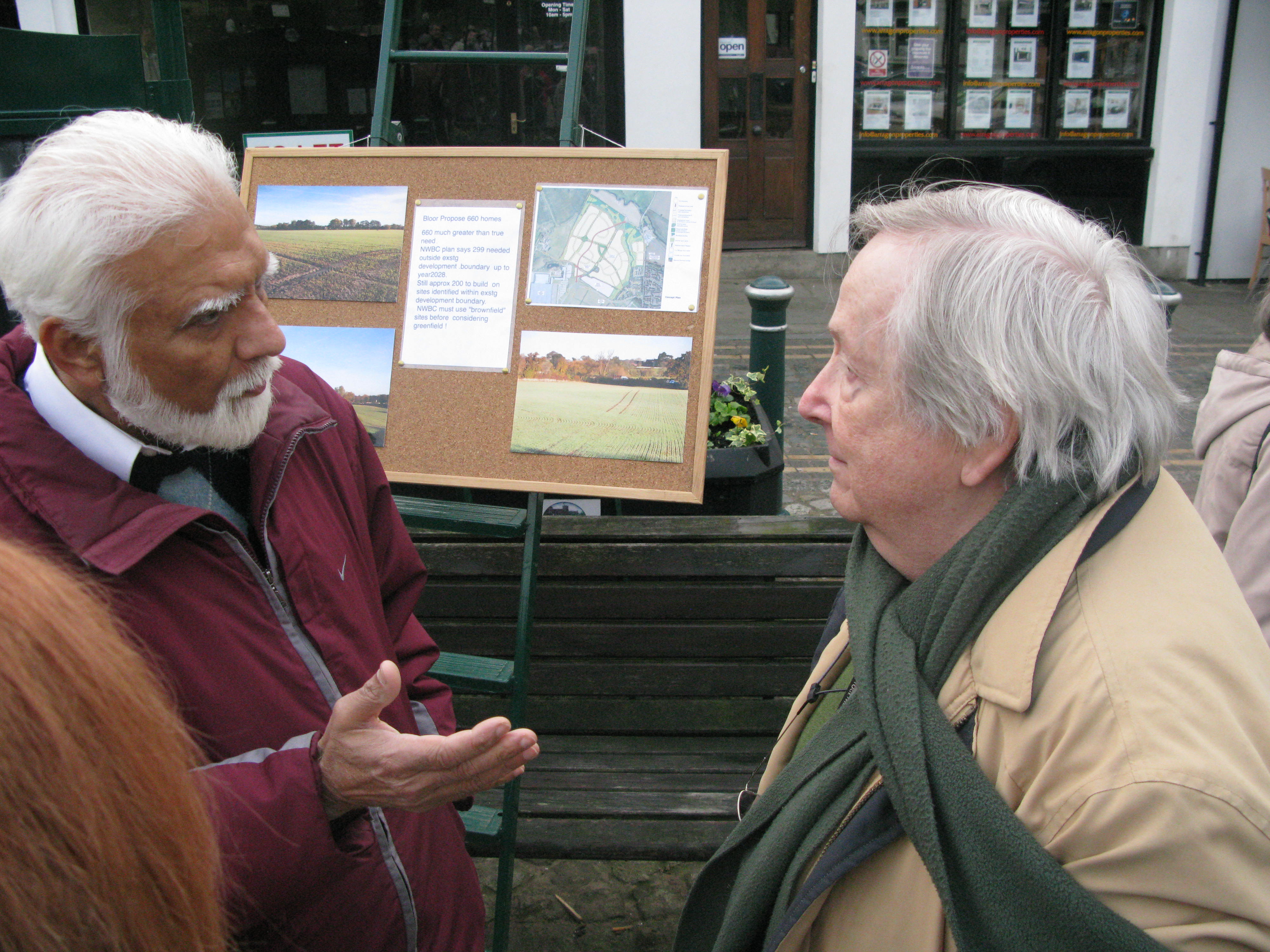 Chris Clark, who is standing for the town council, helped to collect signatures on a petition against the development.  “Everyone was ready to sign our petition,” said Chris Clark. “People were delighted Mike O’Brien and Cllr Pickard were here to support them.

“This development does not have adequate infrastructure to support it. Where are the shops, the schools, the other facilities communities need?  This is just a money making exercise by Bloor Homes. I want the Town Council to oppose this development.” (See picture of Chris Clark collecting signatures).

Liz Brownsword from Grendon told Mike O’Brien, “I used to work for Bloor Homes. I know what they are like. They are ruthless. This is a bad development which the council should throw out.”

Her friend Lestrine Huckfield from Atherstone said, “People need homes but putting so many in these fields is wrong.”

Jane Ward agreed, “I hope the council will reject this application.”

Debby Partridge who lives nearby said, “This scale of development will bring in lots of children but they are cutting staff at the Atherstone School. There is no proper planning going on for a development of this scale.” See picture of Mike O’Brien 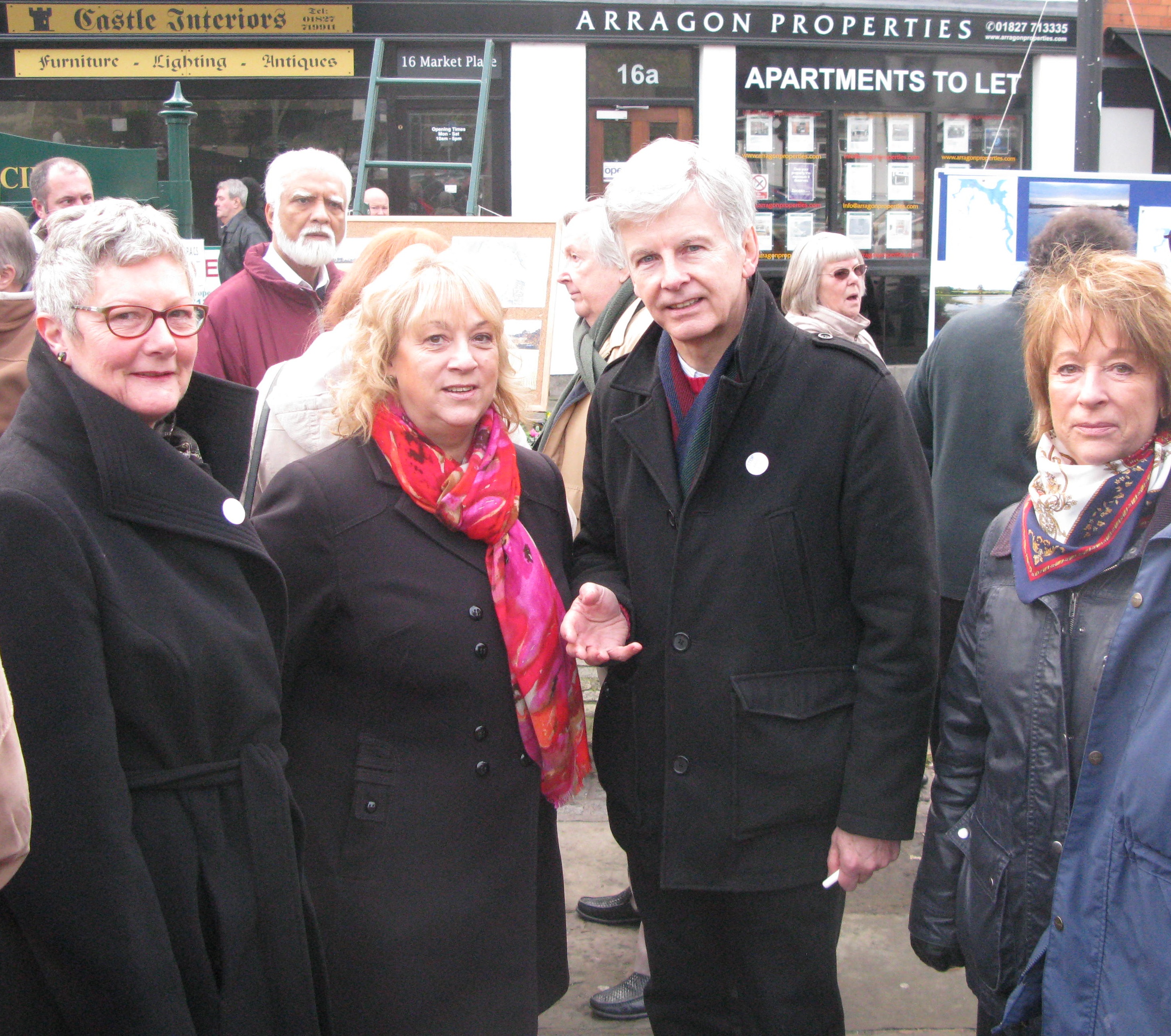 Maggie Mangan from Northcote Walk Atherstone showed Mike O’Brien how the drainage system proposed by the developers would create a large pool near her home with the potential to flow into a nearby brook which would then flood risking existing house. ” The developers seem to be proposing to drain flood water from their building land and put it into our area which risks flooding our houses. They really had not thought this out properly.” (See picture of Maggie Mangan showing Mike O’Brien the drainage system on a map.) 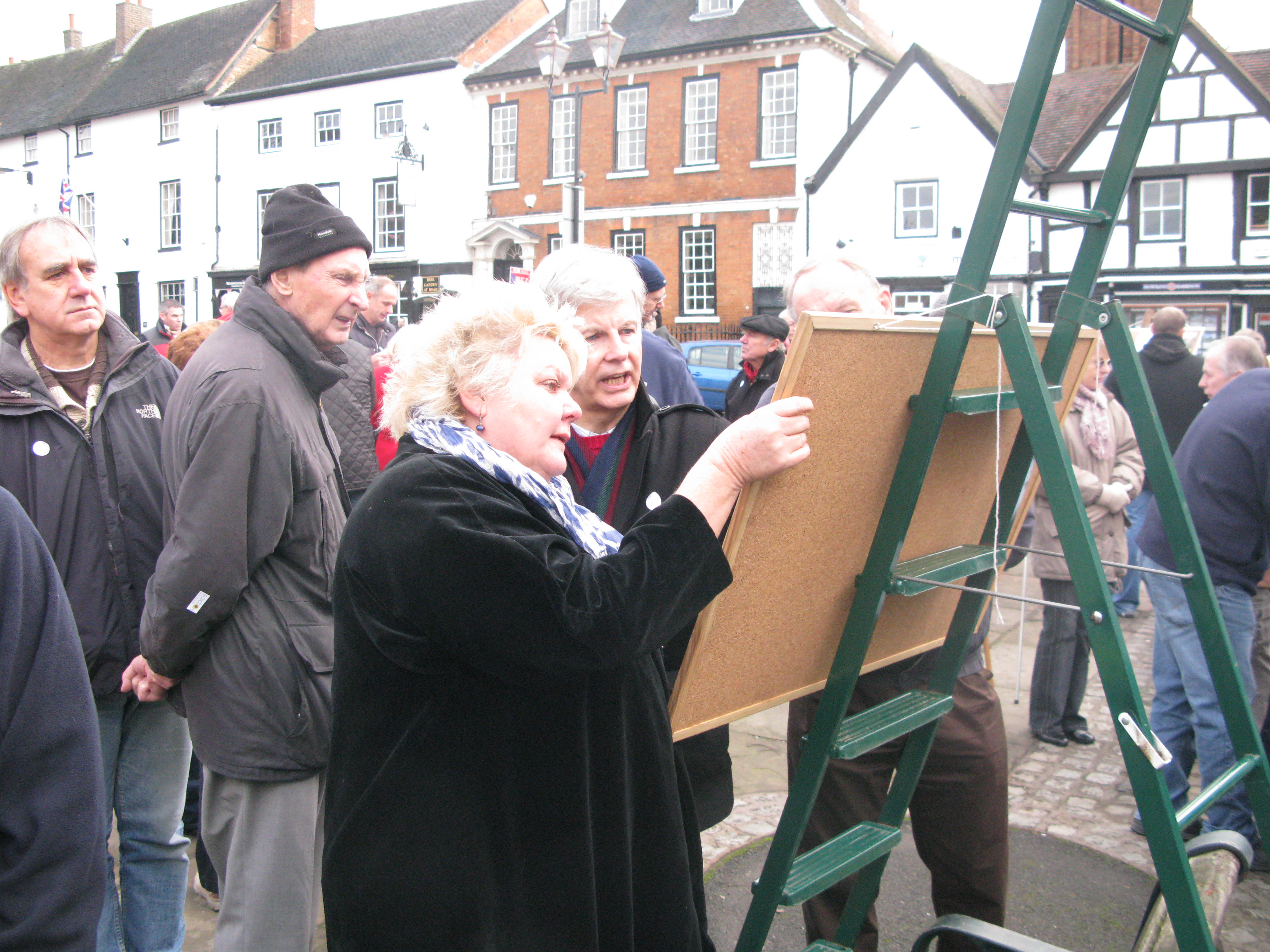 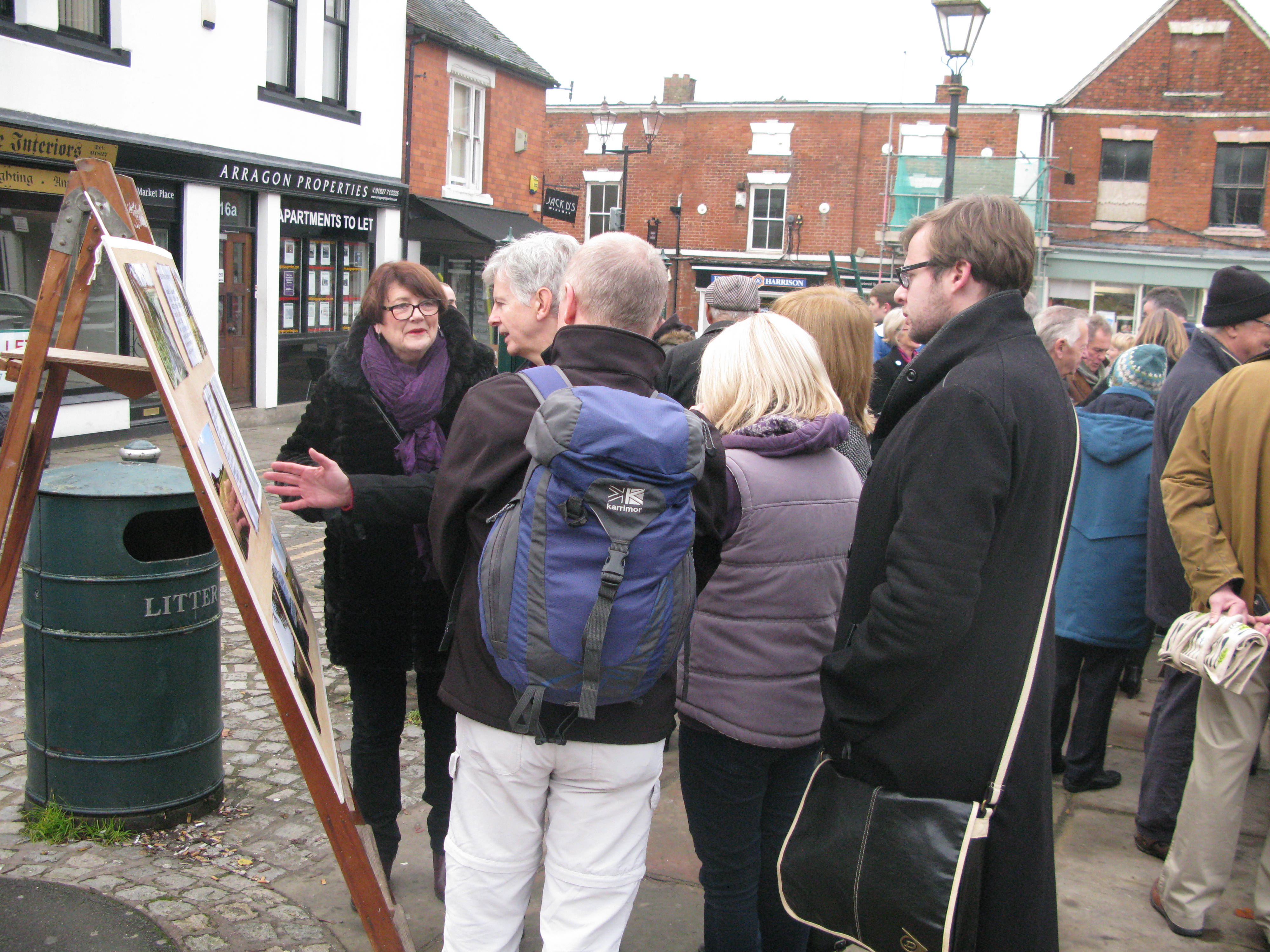