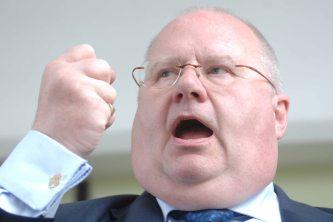 In a major embarrassment for Tory county councillors and Dan Byles MP the Secretary of State for Communities and Local Government Eric Pickles has dismissed their proposals for a unitary council for Warwickshire.

In the last week the Conservative County Council Leader Cllr Izzy Secombe has held a conference to discuss abolishing borough councils and creating a Warwickshire unitary authority and the MP has called for money to be spent on a referendum on the issue.

But in the Commons Mr Pickles has echoed local Labour warnings that the proposal “is a fundamental waste of taxpayers’ money.”??

Mr Pickles told Mark Pawsey, the MP for Rugby in answer to a question in the Commons:

“I said before the last election that any local authority official who came to me with a proposal for a reorganisation would be met with a pearl-handled revolver that I kept in my desk. It sounds as though it is time to oil the thing again.

“This statement blasted a hole in the unitary county council boat floated by Cllr Secombe and Dan Byles.  It’s sunk and they have been left red faced. Labour warned them this was a very silly proposal. They just got carried away with it, holding conferences and proposing a massively expensive referendum.  They need to now admit its dead in the water and move on.”