Staff at George Eliot Hospital in Nuneaton demonstated outside Coleshill town Hall on Wednesday 26th to protest against government proposals to invite private companies to bid to takeover the hospital. The board of the hospital had decided to hold a meeting at Coleshill where the bidding process currently under way would be discussed, therefore staff organised the demonstration outside

The staff were joined in the campaign by Mike O’Brien the former Minister of State for Health who is standing for Labour in North Warwickshire at the General Election. Mike said, “Staff are concerned at the Conservative proposals to sell off the hospital. I am asking local people to sign our petition against the sell off. We need to let local voices be heard now rather than waiting until they sell it later this year.” 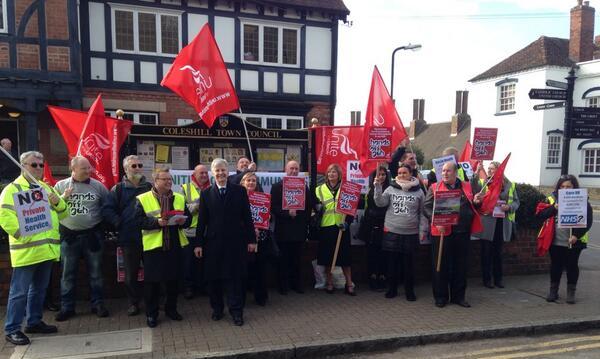 In 2011 government rules stopped the George Eliot Hospital from becoming a Foundation Trust.  Ministers ordered it to either merge or find “a partner” to run it. The shortlist of bidders includes two private companies, as well as two NHS hospital trusts. The buyers hope to takeover in November 2014.

Two companies are bidding to run the hospital. They are Circle Health Plc, which took over the first privately run NHS hospital in Cambridgeshire in February 2012 and asked the NHS for money seven months later, and  Care UK, which runs private care homes for the elderly. In addition, there is interest from an NHS Trusts based at Warwick hospitals.

An added complication is that in July 2013, the George Eliot Hospital was identified in the report by Sir Bruce Keogh, the Medical Director of the NHS, as having serious problems and needing to urgently improve its administration. The report says that managers were taken by surprise in 2011 when mortality rates unexpectedly rose. The hospital is being helped by University Hospital Birmingham to improve the quality of its services. The Care Quality Commission also expressed concern in October last year.

“The government has put our local hospital at the cutting edge of Conservative Party privatisation of the NHS. If our hospital is privatised then others will be privatised around the country.

“Ministers claim its not privatisation because an NHS logo will still be on the door and patients won’t get invoices but this misses the point. NHS values matter. The NHS should put patients before the profits of shareholders. Privatisation of hospitals devalues the public service ethos of the NHS because it forces hospital managers to consider what is best for their bankers and company shareholders before patients.

“Our aim is simple: stop the hospital being sold or franchised to a private company.  We do not oppose the right NHS ‘partner’ helping the hospital, providing it preserves NHS values of public service and putting patients first.”