A new business networking group was been launched in at a breakfast gathering at the Coleshill Hotel on Wednesday to build business relationships in the area. “B46 Business” aims to bring together local business people to encourage local sourcing of goods and services and to create new business opportunities. B46 is the postcode for the area 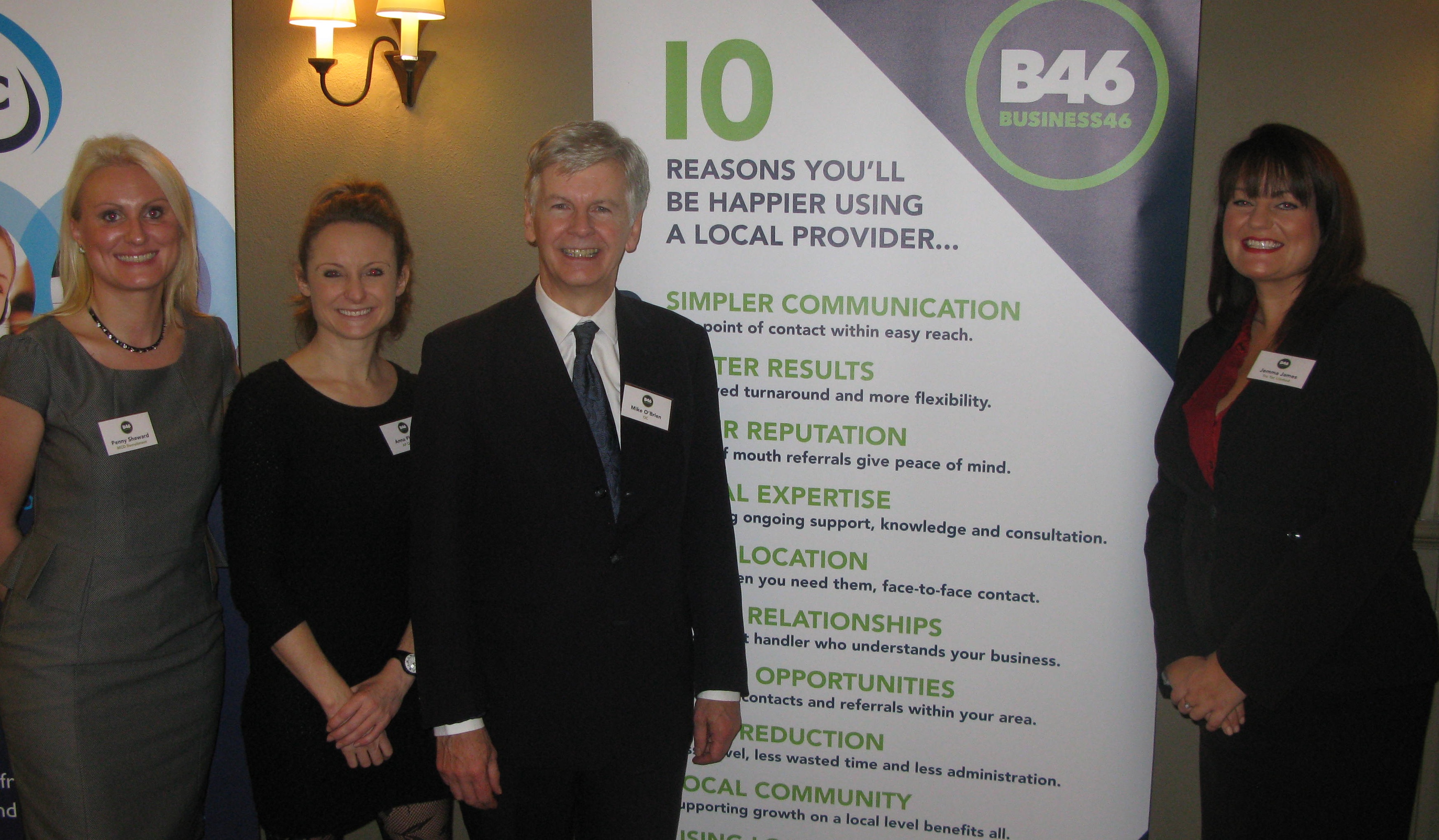 Jemma James of local company TruTac, Penny Sheward of MCD Recruitment and Anna Plotnek of AP Designs have worked with other professionals to set up the venture and invited Rt Hon Mike O’Brien QC as a former Business and Energy Minister to be the guest speaker at the launch event.  About 40 professionals attended the launch of B46 from businesses as diverse as DHL, Magic Accountants and Blue Box Self Storage. Indeed there was so much interest that the breakfast event had to be moved into a larger room.

After its successful launch the group plans to start monthly gatherings from January with over 300 businesses in Coleshill and B46, there are massive opportunities to bring people together to enable them to do business.

Jemma Jones said the aim was not only to allow better networking but also to let people know the opportunities in the area and to bring in speakers on key business issues.

In his speech launching the network Mike O’Brien set out some of the things that might change for small businesses after the next election. Mike O’Brien, who is standing again for Labour at the general election, said,

“I congratulate Jemma, Penny and Anna for the successful delivery of this idea. Networks have worked in other areas and they will work in B46.  Local networking can create new opportunities for business and jobs.

“Local sourcing of products and services means customers get a personal service from local business they know and which understands their needs. It boosts the local economy and encourages investment into the area.”

Speaking after the recent closures of Greenwoods Communications in Coleshill and nearby Daw Mill Colliery with a combined loss of over 2000 jobs, which has hit the local economy hard, Mike O’Brien looked to the future. He said,

“After a decade of prosperity, business has had a hard time in the last five years. If Labour wins the election it aims to help business recover.

“Secondly, energy prices would be frozen from May 2015 to 2017, reducing costs to business worth on average £1,800.  As a former Energy Minister I know the energy market needs reform. It is dysfunctional due to the way privatisation happened. It doesn’t work for business or families and the regulator, OFGEM, is ineffective. The freeze in prices will give us time to change the energy market to make it more competitive, open and efficient.

Thirdly, the old idea of a passive, non-interventionist government must go. In France, Germany, China and even the USA, their governments help to give their business a competitive advantage.  Britain can’t afford a minimalist government. We need a government that intervenes to help business get access to finance, skilled workers and markets and which encourages innovation.

On the wider economy, Mike said,

“In 2009 Labour saved the banks, but that was expensive.  We must pay down the debt, but the key to doing that is economic growth. Every thing will be costed, but in the modern interrelated economy much of private business sees government as a customer for goods and services.  When government adopts a slash and burn policy the private sector suffers, so public finance requires more careful handling.”

Harry Taylor, a businessman with a family garage company in Atherstone, introduced Mike.  He said, “We wanted Mike to do the launch because as a former Business minister who lives in the area, he understands the problems faced by local businesses.”

Speaking afterwards Mike said, “The B46 group lets business people know what’s going on and enables them to make valuable contacts. I am sure the group will go from strength to strength. It was a great opportunity for me to talk to talk to the local business community. I am delighted to be asked me to launch such a successful new project.”