200 jobs to be created near Dordon in North Warwickshire 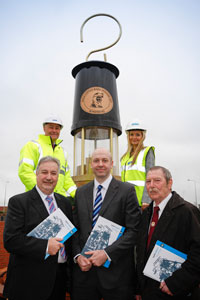 The creation of up to 200 new jobs has been welcomed following the letting of by IM Properties of an industrial unit at BirchCoppice Business Park near Dordon in North Warwickshire to a car components supplier.

IM properties have announced that the 169,000 sq ft Unit 2 has been let to DAU Draexlmaier Automotive UK Limited, a supplier of electrical components to the automotive industry, on a 15 year lease at £5.75 per square foot. The company will be using its new premises to service an existing contact with manufacturer Jaguar Land Rover.

Birch Coppice Business Park, at the junction of the M42 and the A5 just outside Tamworth, on a 400 acre site is the West Midlands’ largest rail-served development site and one of the regions’ biggest employment success stories.

“I once worked on the Birch Coppice site when it was a colliery employing 800 people, now we have created a business park employing up to 5000.  This latest addition of 200 jobs fro the car industry is great news for the area.”

Three former miners represent Dordon on the council, John Winter, Ray Sweet and Peter Morson. They were heartbroken when the mine closed twenty years ago and worked with Mike O’Brien, who was then MP, to reopen the site as a Business Park to bring jobs to the area. Peter Morson says

“We wanted some jobs.  We didn’t expect it to be such a spectacular success. But it was a fight.  Only three years ago we had to battle Conservative councillors who all voted against expansion of the Business Park. If they had had their way there would have been  no land for these jobs or for new Ocado plant on the site.”

In July 2013, IM Properties began construction of two units totalling 334,500 sq ft. Both units have now been let prior to their completion, with a deal having already been agreed with distribution and outsourcing specialist, Bunzl UK for the 165,600 sq ft Unit 1.

“We are extremely pleased to have let both units prior to their practical completion, which highlights the strength of Birch Coppice as a location, IM Properties’ reputation for delivering high quality, flexible industrial developments and is further evidence of the improving economic sentiment.”

The Birch Coppice Business Park is located close to the M42 in North Warwickshire and is home to a number of leading businesses including Ocado, UPS, Volkswagen Group, Euro Car Parts and Roadways Container Logistics.

A Draexlmaier spokesperson, said: “We are delighted to have secured our new facility at Birch Coppice. This new premises will be integral to us servicing JLR and the location works perfectly for us”.

“I remember the early meetings to bring IM Properties onto the site. They were surprised at the passion of the councillors, Peter, John and Ray for getting them onto the site. I don’t think they had come across such strong support from councillors before.

“This project has been a great success for IM Properties but is also a well deserved personal success for these three ex miners who have transformed their community by showing vision and determination.

“And the way North Warwickshire Council worked with businesses in the 1990’s and 2000’s created business parks at Birch Coppice, Hams Hall, Wood End and Atherstone which have helped this area to weather the recent years of austerity. I pay tribute to these three councillors and to the council itself.”

In 2008 Peter Morson got his own chapter in a book by the then Prime Minister Gordon Brown called “Britian’s Everyday Heroes” who described the successful efforts with John Winter and Ray Sweet to bring jobs to Dordon after the closure of the mine.